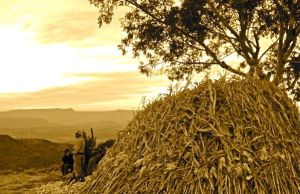 Death was everywhere, and so it was nowhere. Foreigners gawked with unseeing eyes. But the locals had refined the skill of peering through it, a strange sense of nationalism coalescing at a focal point just beyond. Death was deemed unworthy of discussion, Her schedule being so terribly predictable. In the mornings, with eyes rimmed red from restless sleep and ivory hair kinked out of place, She began Her rounds in the prisons, slipping through bars to lift life’s weight off the shoulders of those who had lost sight of their light.  Later, when the African sun dipped below its golden fields, She would set off to tuck in its children who sighed their last anemic breath before working Her way down the highways to slurp up the blood spilled by reckless drivers. On the most rare of occasions, a murder or two would arise, but even those lacked their scintillating element. At their typical hour just before sunrise, She would wade through fading music into the local saloon. The voices of impassioned men, rising over money and women, would fill the void until a panga knife would welcome silence once again.  She’d drag them out, up, and away, receiving not much notice, and certainly no recognition.

Swinging through to disrupt this order in increasing regularity was Malawi’s noose, which the State tightened around the necks of its killers before their scheduled time. The manner in which She dealt with these betrayals was rather passive aggressive; the more that Malawi encroached on her terrain, the more She plucked away the lives of its prisoners before they reached the gallows. Each year more and more bodies would mysteriously collapse in its prisons until one day Malawi got the message that perhaps it ought to give more deference to Her after all. And so the High Court made a token offering by doing away with the automatic death penalty, declaring that in instances where She opted for a run-of-the-mill bar fight or domestic disturbance, the State had no business interfering with what was Hers to take. It was only when She showed off a rare spasm of ingenuity—driven by a cannibalistic urge or whimsical desire to bewitch—that the State was entitled to rebuke Her and slip on the noose.

And so, the killers and the falsely-branded killers who were waiting patiently in line for their hangings suddenly blinked. Given the opportunity to present why their crimes were so dreadfully unoriginal, and thus why they deserved life, the prisoners felt the sun shining brightly through their windowless cells.

Five years went by, however, and the killers and the falsely-branded found themselves still waiting in line. Files had gone missing. Others had been mixed up. Those responsible in the courts of justice for pushing their cogs around and around that laborious machine had other priorities. With the threat of the noose still hanging overhead, Her prison rounds had climbed higher than ever, this year reaching one out of every twenty prisoners.

Maya and Aman found themselves waiting in Zomba prison, which had made an appearance in The New York Times seven years ago: “The Forgotten of Africa, Wasting Away in Jails without trials.” Its photo proved wrong those who doubted Malawi’s ability to squeeze 160 people into “a pen the size of a two-car garage.” Murderers and tomato thieves alike shared one another’s perspiration, which released a cabbage-like aroma, as they took turns rotating in patient choreography on the concrete floor to relieve the pressure mounting in their bones. Toward the back of a lone empty cell, which had been set aside for interviews and interrogations alike, stood the two law students who had flown in from the U.S. to wag a proverbial finger at Malawi. It was time the State stop antagonizing Her and get on with the resentencings.

Upon arrival, Maya and Aman began collecting and reviewing the case files and interviewing the prisoners. Many of the facts they had already unearthed appeared promising. Unfit for the gallows were the juveniles, the mentally ill, and those who merely had no excuse for the boring nature of their killings. (next page—>)

I am an international attorney who believes in the power of story to inspire a better world. Join my 100 day journey around the globe!
View all posts by Dee Walker →
This entry was posted in Creative writing, On Justice, Perspectives, Travel and tagged Africa, criminal justice, death penalty, human rights, law, Malawi, short story, writing. Bookmark the permalink.