Once Upon a Time on Gili Trawangan

Last weekend, I did Gili Trawangan (“Gili T”) proper, partying too hard and getting too sunburned. There was another element that this island offered me, though, which took me by surprise.

On Friday, I boarded the boat on Lombok immediately after descending Rinjani with dirt streaked across my arms, legs, and face and caked into the corner of my eyes. In addition to looking like I had been raised by wolves, I was exhausted, having risen at 2 a.m. to summit Rinjani. Oli and I had a rushed parting at the dock, and so I was still in the space of letting go of our friendly attachment to one another.

So, it is odd that the word “refreshing” is what marks this last weekend. Jon uttered it first, but I felt the same way about meeting him.

He was on my boat from Lombok and, after overhearing me ask around about places to stay on Gili T, took pity on me and the ridiculous state I was in. After we disembarked and I began to wander aimlessly away from the beach, he kindly offered to show me a homestay, run by a young couple with an infant, that he had been living at for the last month.

A few words of introduction:

Funny enough, like Oli, Jon is French Canadian, originally from Montreal. (As a side note, he also recently gave up drinking and smoking, as has Oli. The coincidences on my travels, some perhaps even verging on themes, have at times made me pause and scratch my head.) If the focus of Oli’s journey is happiness, however, Jon’s is spiritual — which I picked up almost immediately as we walked toward the homestay. It took 24 hours before he framed his journey in those terms, though, for fear of making me uneasy.

But let me back up. Jon is, first and foremost, a free spirit. Second, it wouldn’t surprise me if one day he became a shaman. Third, his calling is environmental sustainability; his vision is to develop a self-sustaining farm in Latin America where people can stay and be exposed to (what should no longer be considered) an alternative lifestyle. Lastly, his passions are meditation, yoga, and free diving.

Jon spent much of his youth working in his dad’s mechanic shop, and expressed his creativity through metal work (at one point he built a motorcycle, which he then used). He went on to do marketing for the Canadian MTV equivalent until he escaped from an unsustainable lifestyle. Since then, he’s been on the road for five years, spending a significant amount of time in India and Australia. For the last month, he’s been living on Gili T in order to train with one of the world’s top free divers, Michael Board, whose record is 102 meters (334 feet) with a fin (YouTube video here). Jon’s is 50 meters (164 feet). Without a fin, Jon has Michael beat at 41 meters (134 feet). I say this because I find it impressive, but Jon cares only about doing his personal best each day.

Does that fit neatly together for you? Yeah, nor does it for me, and I love it. Perhaps because of that, I haven’t found a thread to weave through this post to make it cohesive so I’ve decided not to force it. I believe, in any event, that Jon would appreciate the following stream-of-conscious style of writing that pretty much reflects the nature of our time together. 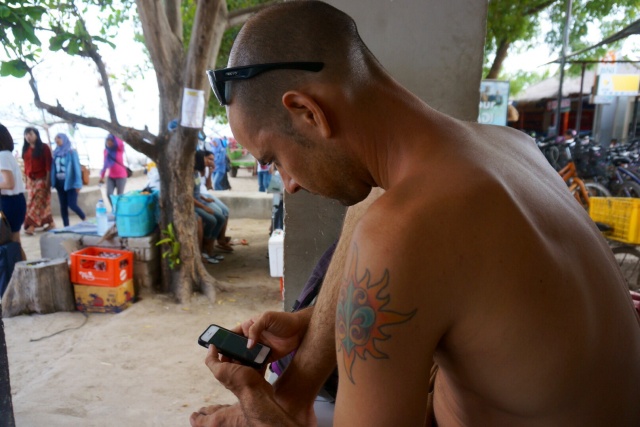 Over a dinner of mouth-watering salad and seafood on the beach, upon which swaying boats lit up the waves with twinkly lights, Jon discussed the importance of mindfulness and clearing one’s head of chatter. I’ve had training in mindfulness, and recognize that it’s helpful for surviving a law career in a healthy manner, but I protested nonetheless. “I love my chatter,” I said, believing that that’s how I connect the most unrelated of dots and feel a sense of magic about the world. He pushed back, and for his reminder I’m grateful. 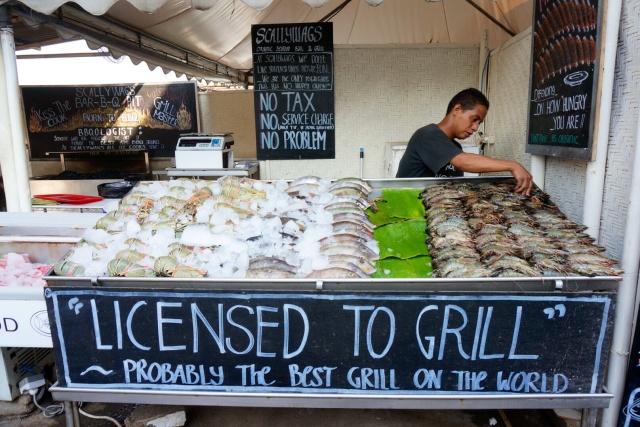 That evening, he laid out his Indian sarong on the porch and we drank rose tea beneath the stars, discussing various cultures’ paths to enlightenment and quests for oneness with the world. Jon spoke of his recent studies in India and I, my exposure in Cambodia. Eventually, the island’s emaciated, inbred cats — defined by their stubby, corkscrew tails — drowned us out with their mewing as they circled about our legs.

I awoke at dawn to the crowing of a rooster who was deliriously happy to be a rooster that morning. It was a more restful sleep than I had had the last few nights anyway so I happily dragged my butt to the beach and sat it there for the rest of the day — my poor skin paying for it later, despite having been under the shade.

Toward the end of the day, I took a walk along the beach as the sun began to sink lethargically into the sea. Jon and I ran into each other, grabbed some veggie stir fry, and wandered about to find the party. Sama Sama, the reggae bar, was where it was at. The band, belting out covers of Bob Marley (who’s revered as a deity here), packed the place. What made the crowd erupt, though, was “Once Upon a Time on Gili T,” a song we had heard banged out beautifully by some teenagers on water jugs earlier that evening on a moonlit side street. Locals and travelers mingled, spilling out onto the street and the beach beyond. 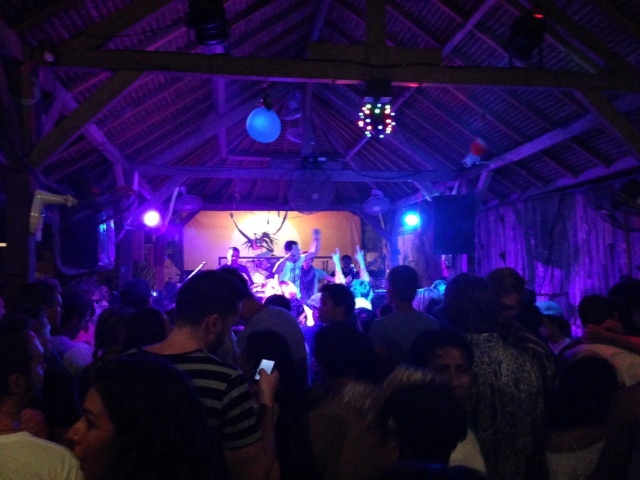 Jon and I danced in the back with the owner of our homestay, who laughed freely, swung his hips as only Indonesian men know how to do, and sucked on clove cigarettes. 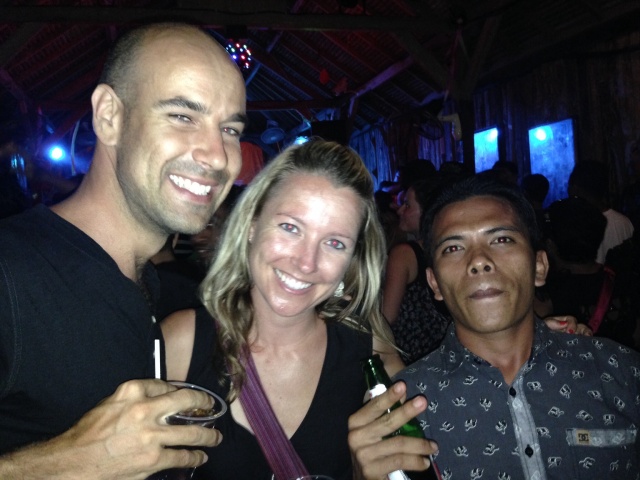 Eventually the smoke and one too many Bintangs had me feeling nauseous so we found some bean bags on the beach and chatted with some fellow free divers. What a world! So utterly foreign to me.

Other than a local who was making good headway with a study abroad student, Jon and I closed down the beach with good conversation, touching on the science of health and medicinal eating, my run-in with homeopathy when western medicine failed me, and how some believe that the manner in which you eat reflects the type of lover you are.

We eventually left the beach, and the young duo who were in full make-out mode, and made what we thought at the time was a brilliant decision to consume some fried springs rolls from a street vendor. How regrettable. We were both done for the night.

The next day, Jon took me snorkeling along a coral reef, which was out of this world! I’ve never seen fish with such electric colors. Blues, purples, yellows, and even ivory white that caught beams of light as if at a night club. Some fish sported cheetah print, others tiger stripes, and still others, orange flames on their flanks and flashy hooks on their tails.

There wasn’t much time before I had to catch my boat back to Bali, where I was headed to Ubud for the next few days, but Jon and I managed to squeeze in some more interesting talks, including the newly discovered properties of water (Jon structures his water after filtering it — for info on this, see the documentary, Water: The Great Mystery).

He walked me to the harbor, but not before giving me (structured) water, earplugs, and tea. Small acts of kindness and caring go so far when on the road.

We expressed our deep appreciation for the influence we had on one another’s lives in less than a 48-hour period. He too understood that language often fails people when it comes to describing bonds developed on the road. A French expression he left me with seems to capture the general gist: “Dens gens au gout du jour dans ta vie,” which roughly means, “People that have the taste of our life today.” 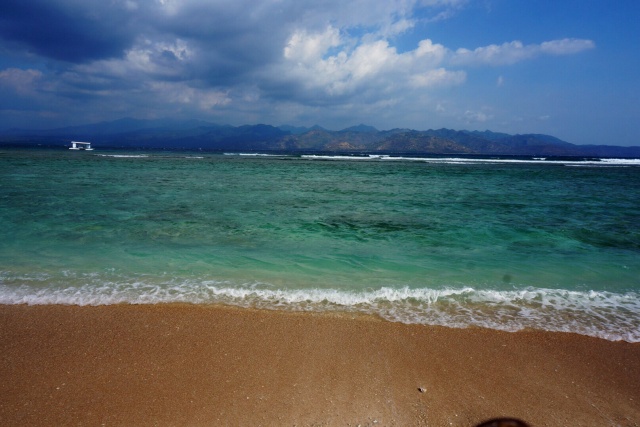 I am an international attorney who believes in the power of story to inspire a better world. Join my 100 day journey around the globe!
View all posts by Dee Walker →
This entry was posted in Asia, Indonesia, Round the World and tagged dancing, free diving, gili t, health, indonesia, mindfulness, Reef, snorkeling, Spirituality, Sustainability. Bookmark the permalink.