Santorini, with a kama sutra closing

Before I left for Santorini, I met two people in Athens who were in town for an international travel writer’s convention. First, I met a woman from London who quit the practice of law to freelance. I then met Nathaniel Boyle, who hails from Boston and runs the Daily Travel Podcast, the only daily travel podcast in the world. I love his philosophy: “The only way to uncover the best experience is through chance discovery, by allowing yourself to get lost and let the stories happen to you.” If you enjoy the angle of my blog, which focuses largely on the people and connections I make while traveling, then you’ll devour this podcast.

“If one is able to tap into people’s emotions and really take them places,” he said to me, “there’s a niche for that.”

That night I spent some time with myself on the roof of City Circus overlooking the Acropolis, whose glow lit up the city below. When I turned my gaze upward, a shooting star danced across the sky. The fact that there was just one felt special in its own right. But then ten minutes later another followed. And I couldn’t help but smile.

Around 3 p.m. the next day, I boarded the ship for Santorini, having been told that we would arrive at 11 p.m. I soon discovered that internet was not an included feature. Out went my plan to track down and book a hostel.

Thirteen hours later, at 4 a.m., a crew member awoke me from the plastic chair I was slumped over and told me with his hands to disembark. Down the ramp I went, and with no buses or cabs in sight, resigned myself to roaming the deserted, dark harbor with my fingers crossed until dawn. Just when I began to strategize about which was safer–bushes or an abandoned building–I met a woman who was awaiting her hotel shuttle. I asked for a ride, as did two other guys who were in the same boat (wah wah). It was nearly 5 a.m. when we arrived. Which perhaps explains why it didn’t seem odd to split a room with a 6 foot 5 inch German.

The next morning (as in three and a half hours later), my new roommate and I decided to hike to the end of the volcano.

What I immediately loved about this ER doctor from Hamburg was how he comfortably embraced our moments of silence from the start. He was rounding out a two-week sailing trip through the Greek islands, having bailed out a few days early to hit up Santorini. An hour into the hike, after we talked about family and career aspirations, we got around to introducing ourselves. Fabian is his name, affectionately known as Fabi. 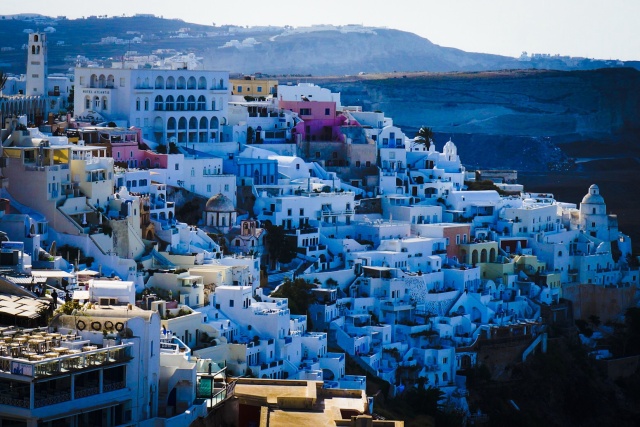 To fully appreciate this romantically rough island, one has to know its birth. Santorini was formed by one of the largest volcanic eruptions in recorded history some 3,600 years ago. Only its 980-foot high rim remains today, upon which the town is perched, overlooking the massive, water-filled caldera, which spans 7.5 by 4.3 miles and is 1,300 feet deep. 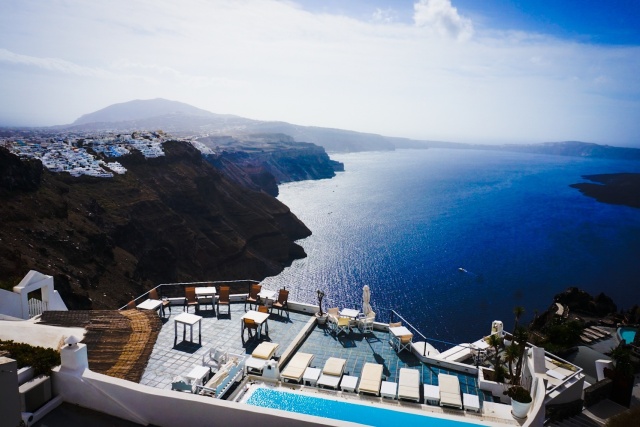 Santorini’s white-washed walls, accented by stunningly deep blue windows and doorways, boast an elegance that stands in stark contrast to the dusty, volcanic earth upon which they rest.

One forgets that virtually nothing grows from these hardened ashes due to the expansive bougainvillea that weaves through town, reaching sky high above quaint streets. Also miraculously thriving are the vineyards, which have been coaxed into yielding world-renown wines. Farmers (and engineers): persistence will always be yours. 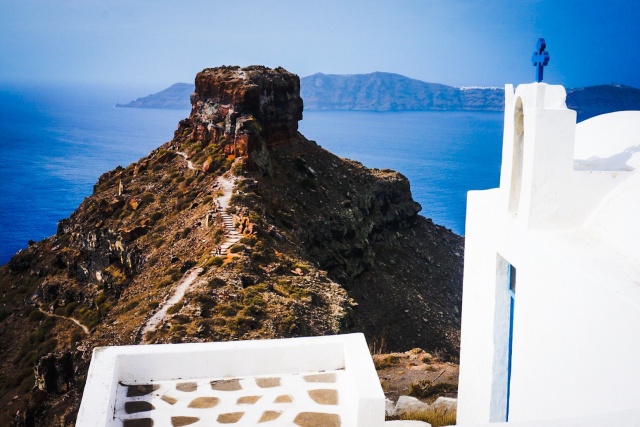 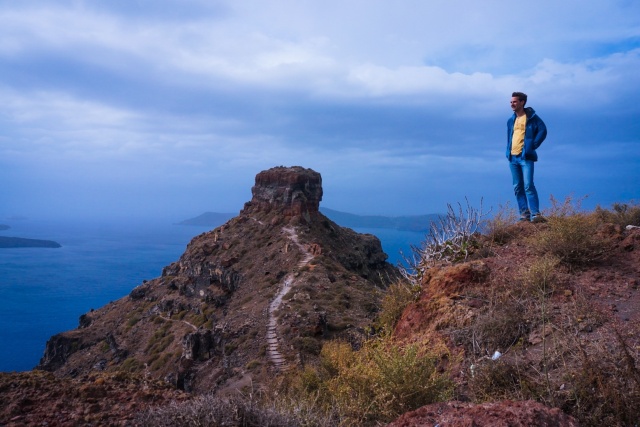 After a few hours of hiking along the ridge, grey skies began gathering thick clouds and blowing them quickly toward us. Sheets of rain, which only moments ago had passed over a distant island, were suddenly upon us. Fabi and I ducked into a hotel to pass the time over some beers.

We watched troubled boats go by while a bird with the itty-bitty-est wing span hovered motionless in the sky for a quizzically long time.

Fabi and I connected on a variety of levels. One of our first discussions, sparked by the numerous, glaringly white churches we passed, concerned how our religious upbringings and feelings about certain magic in this world have lent to our deep sense of spirituality. 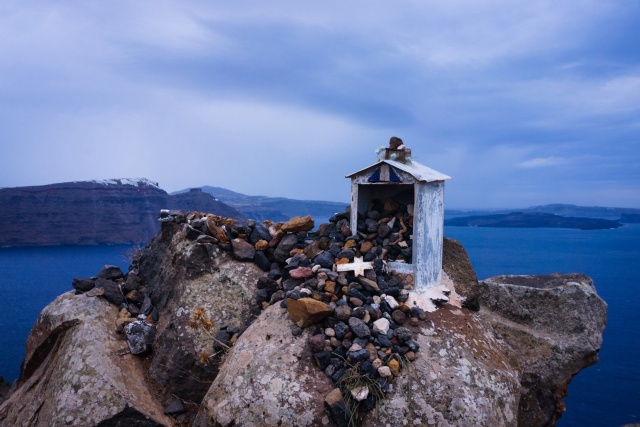 We also debated the sensibility of marriage.

And then, at some point, we found ourselves in an awkwardly stubborn debate about the direction in which the sun rises, each of us throwing down good money…until we realized that responsible for the discrepancy was translation trouble.

Most of the storm wound up skirting around us. Fabi and I resumed our hike along the towering cliffs and reached the island’s point before sunset, finding a wall to hang our feet over as we threw back peanuts and another beer.

Unbeknownst to us at the time, Santorini is famous for its sunsets. So when the blindingly bright primary colors spread themselves across the sky in thick banners, we once again found ourselves speechless. 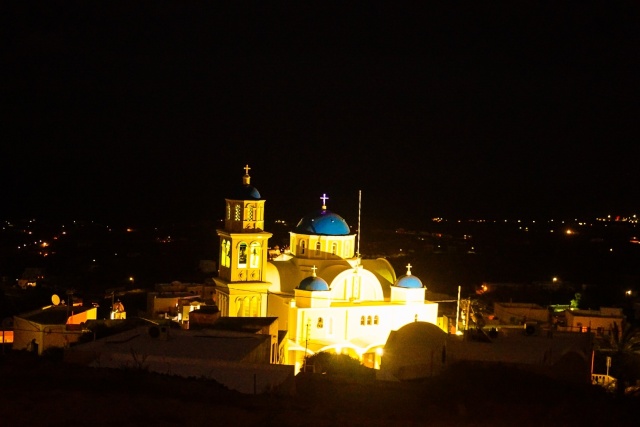 That night we grabbed gyros and then found a bar without a closing time. The DJ was mixing 90’s hits and Greece’s national soccer team was playing. I was content.

Between our poli-sci backgrounds and similar passions, Fabi and I talked long into the night. We vowed to one another to be better at incorporating certain passions into our lives–and to hold one another accountable to those promises.

It’s a small and utterly unimportant detail to bother mentioning, but I find it funny that although we had only known one another for a matter of hours, Fabi knew that–despite the fact that I was wearing bright pink nail polish and a pink jacket–black is my color.

What is it about the nature of relationships on the road that causes such a uniquely open connection? I suppose it’s to no one’s surprise that timing, while it isn’t everything, is largely responsible. Fabi and I, for example, explored Santorini together for less than 48 hours. When you know what little time you’ll be spending with someone–someone who brings to the table no baggage and no strings attached–there is an element of liberty upon which the relationship is founded. Because everyone involved knows when, and how, things are going to end, we all can trust each other to truly live in the moment.

The TVs switched off, the lights lowered, and the DJ transitioned to traditional Greek music. The lone holdouts–nine middle-aged men–hummed along, chain smoking their cigarettes and periodically flashing grins at the young waitress.

It was the waitress’s last night on the island so I offered to take a photo of her with her male groupies. The next thing we knew, Fabi and I were being served rounds of what tasted like Jäger shots and then each confessing to one another a secret that, at the time, only one other person in the world knew. Now, there are two.

Eventually we cut ourselves off and found our way back to the hotel. Fabi told me a bedtime story in German (he pointed out that he could have been reciting a cheesecake recipe for all I knew) about a boy who lost his mother. Around town the boy went, describing her to everyone as the most beautiful woman in the world. When someone finally helped the boy find her, she turned out to be hideous. “See!” the boy exclaimed. “Isn’t she beautiful?”

The next day, Fabi and I boarded the ship back to Athens for what this time was a nine-hour journey. We were unbelievably exhausted. There was no available seating on the packed boat so I pushed two plastic cafe chairs together, and we spent hours contorting ourselves into various positions, attempting to get some sleep.

If you ever find yourself in tight sleeping sleeping quarters with another person you feel comfortable leaning on, here are 5 kama sutra positions you can do in 3 square feet.

5 kama sutra positions you can do in 3 square feet

1. The traditional: lean your back against the other’s chest with the other’s forehead on your shoulder.

2. The Eagle and Rodin’s Thinker: face each other with your legs spread out over the other person’s arm rests, with his/her arm resting on your knee to support the face.

3. The Eagle and the Hunchback: same as above except closer, with the other person’s head resting on your chest.

4. The Thomas-the-Train: both of you slumped over forward in the same direction, with the other person’s head resting on your back and your head on the chair’s back.

5. The Twister: body parts gone haywire until extreme discomfort and laughter unwinds you.

Eventually throwing elbows and knees into each other’s ribs and faces got old so we stepped outside onto the deck for some night air. The twenty or so men who had been smoking there since we embarked were now leaning over the ships’s railing with drawn faces. Except for one guy who didn’t make it. A handful of women, most concerned but a few irritated, came out to offer their company.

A lightning storm danced along the horizon, splitting the darkness of the ocean from the darkness of a lone island. Fabi and I expressed our awe, speaking into the whipping wind that carried our message out to sea.

Over a final beer on the dark steps of Athens, Fabi closed with the German expression: You always meet the same person twice.

I am an international attorney who believes in the power of story to inspire a better world. Join my 100 day journey around the globe!
View all posts by Dee Walker →
This entry was posted in Europe, Greece, Hiking, Round the World, Travel and tagged caldera, kama sutra, Nathaniel Boyle, Santorini, volcano. Bookmark the permalink.

5 Responses to Santorini, with a kama sutra closing